A dead male salmon lies in the special spawning channel of Herman Creek near Haines after being harvested for its milt by fish technicians with the nonprofit Northern Southeast Regional Aquaculture Association, Inc. (NSRAA). NSRAA built the channel to collect wild broodstock by harvesting spawning female and male salmon for their eggs and milt. In the background, another wild chum salmon powers his way up the creek to spawn. Because the salmon would have died in the creek had it spawned, the NSRAA fish technicians return harvested fish to the creek for bears and other animals to eat just as they would have done had the fish died naturally.

These salmon are returning to freshwater Herman Creek after three to five years in the saltwater ocean. Spawning only once, chum salmon die approximately two weeks after they spawn. Both sexes of adult chum salmon change colors and appearance upon returning to freshwater. Unlike male sockeye salmon which turn bright red for spawning, male chum salmon change color to an olive green with purple and green vertical stripes. These vertical stripes are not as noticeable in females, who also have a dark horizontal band. Both male and female chum salmon develop hooked snout (type) and large canine teeth. These features in female salmon are less pronounced.

Herman Creek is a tributary of the Klehini River and is only 10 miles downstream of the area currently being explored as a potential site of a copper and zinc mine. The exploration is being conducted by Constantine Metal Resources Ltd. of Vancouver, British Columbia along with investment partner Dowa Metals & Mining Co., Ltd. of Japan. Some local residents and environmental groups are concerned that a mine might threaten the area’s salmon. Of particular concern is copper and other heavy metals, found in mine waste, leaching into the Klehini River and the Chilkat River further downstream. Copper and heavy metals are toxic to salmon and bald eagles. 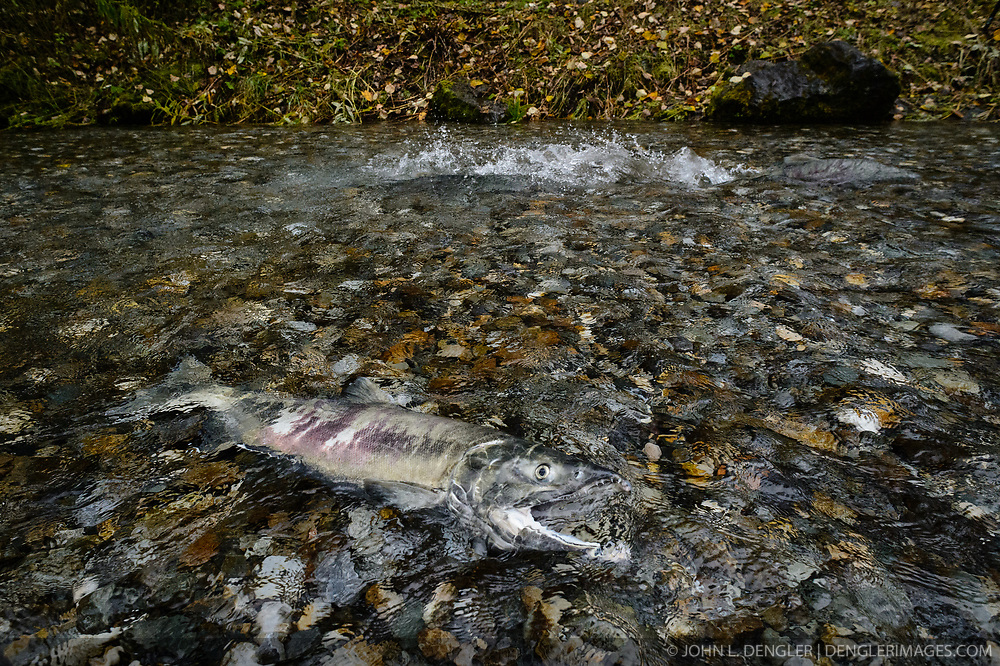